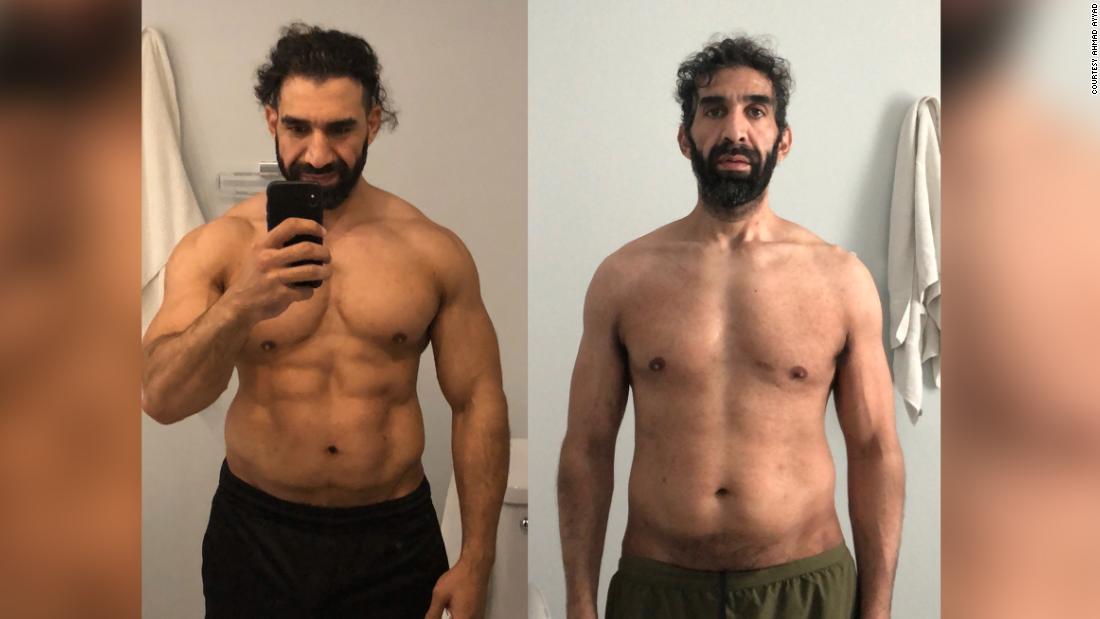 Health, Fitness & Food
Share on Facebook
Share on Twitter
Share on Pinterest
Share on LinkedIn
And when he looked down, he couldn’t recognize himself. Once a 215-pound athlete with chiseled muscles and astounding strength, the 40-year-old looked like a completely different person.
“I woke up and looked at my arms, my legs, and my muscles were gone,” he said. “I was kind of freaking out, like where are my legs? Where did my legs go?”
Ayyad is a coronavirus survivor.
Doctors had placed him in an induced coma for 25 days to save his life.
It’s been a little over two months since those touch-and-go days and he’s still recovering. Still out of breath at times. Still nursing the damage to his lung and heart.
But he has a message — for those who refuse to wear a mask during this pandemic, for those dismissive of public health guidance, for those in the prime of their health and feel invincible against coronavirus.
“It worries me a lot seeing people take this lightly,” he told CNN on Tuesday. “I got it and survived, and I’m still terrified.”

How it all began

It started with an overwhelming feeling of weakness.
One week, Ayyad was running his own restaurant and club in Washington, DC while working at his family’s retail furniture business. He was racing marathons and competing in obstacle course races, taking weekly basketball classes, and boxing, one of his favorite sports.
The next week, his entire life had changed. Walking up the stairs left him exhausted. So did cooking, talking, and driving.
Then came the coughing and sneezing. Eventually it was a high fever, total loss of energy and appetite, and a difficulty breathing.
Ayyad thought he had the flu.
But after one of his friends, a physician assistant, urged him to go to the hospital, he took an Uber to Sibley Memorial Hospital on March 15. Their suspicions were confirmed; he tested positive for influenza and the coronavirus.
His condition continued to worsen. He was placed on a ventilator and immediately transferred to Johns Hopkins Hospital in Baltimore, where he was put in an induced coma.
The majority of coronavirus patients who are placed on ventilators are placed in an induced coma as they are usually too uncomfortable to stay relaxed with a tube down their throat, which makes them feel like they can’t breathe.
Ayyad became the hospital’s third Covid-19 patient and the first to be placed on a ventilator, John Hopkins said.
While doctors remain unsure why the athlete was at more risk, especially with such good health and no preexisting conditions, “there could be factors” they still don’t fully understand, Dr. Sandra Zaeh, who treated Ayyad in the hospital and continued to care for him after he returned home, said in a hospital news release.
“It was extremely emotional,” Ayyad said. “I knew I would be in this completely alone. Then I called my friend and told him to pick up my dog. And that was it. I didn’t know what was coming. I didn’t know if this was the last time I would talk to them. I didn’t know if I was about to die.”

Ayyad doesn’t know for sure when or where he was exposed to the virus. A week before he began showing symptoms, he took a 3-day trip to Florida to visit his brother. It could have been then.
As he lay in a hospital bed, his family members were tormented they would lose him without even getting a chance to say goodbye.
When his mom, Zeinab Ayyad, first laid eyes on her son after he was released, she burst into tears. She longed to hold her son in her arms. Instead, she was forced to stand far away on a street and watch him go inside his apartment to self quarantine in solitude.
Every three days, she cooked for him Palestinian meals — stuffed grape leaves, Molokhia, Maqluba — and did her best to “fatten him back up,” he joked.
“I had nightmares every night, calling the hospital at 3 a.m. just to make sure he was still alive,” Zeinab told CNN.

How things are now

After nearly a month without solid food, Ayyad clearly remembers the moment he got to eat again.
“It was apple sauce,” he said. “I was so happy. That first bite, it felt so satisfying. Well, before I realized I forgot how to swallow. It’s like I didn’t remember how to eat. I had to learn that all over again. But I won’t forget the apple sauce.”
It wasn’t just swallowing that the athlete had to learn all over again. He couldn’t talk or walk either. For the next three weeks, every movement knocked the breath out of him, raising his heart rate and leaving him gasping for air.
But he was far from discouraged.
Every day, Ayyad tried something new. First he started with leg extensions from his hospital bed using the blankets. Then it was side lunges. Eventually he was out of bed, squatting and walking laps after laps. He was determined.
After finally going home on April 22, Ayyad was 60 pounds lighter. He had a blood clot in his left arm, damage to his heart and lungs, and spent the next month struggling to do anything without losing his breath.
But everyday, little by little, he was gaining back his weight — and muscles.
“He seems to be making a great recovery,” Zaeh, the doctor, said.
“It was remarkable to go from seeing him at his sickest in the ICU — intubated, deeply sedated and on his stomach to help him breathe — to seeing him at home. He was smiling and talking about how happy he was to go for a short jog and sit outside with the sun on his face,” Zaeh said.
Ayyad is now almost back to normal. While he’s back to boxing, working out everyday, playing basketball and hopefully running marathons soon enough, he’s still worried about the virus.
“People are acting like it’s gone. It’s not. Wear your mask. Don’t gather in big groups. Take care of yourself and the people around you,” Ayyad said.
“Take it seriously. It’s not a joke. It can kill you, even if you think you’re healthy and immune to it. You’re not.”
He knows. He hopes others don’t have to find out the hard way.
This article was originally published by Cnn.com. Read the original article here.
Share on Facebook
Share on Twitter
Share on Pinterest
Share on LinkedIn